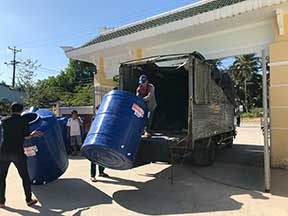 The tanks are delivered to our distribution points by truck from the factory in another province. We usually distribute them at the town offices, sometimes at a school, occasionally at a pagoda.

Clean water is an ongoing problem in rural areas of Ben Tre province as it is in many parts of Viet Nam. It has been exacerbated by drought in recent years and by 11 dams built on the upper Mekong from 1991 - 2020. Most of our recipients get their water from the ubiquitous canals, but it is contaminated and they must buy chemicals to treat it. Additionally, the dams on the upper Mekong reduce the rivers flow and this allows salt water from the South China Sea to come further inland.

The best source of clean water is rain, but that only comes in monsoon season, and our recipients cannot afford storage containers. This is our fourth year distributing 1000 liter plastic storage tanks. This year we distributed 526, bringing our total to 1,262. These tanks cost us $64 each, and its the best way weve found to improve the quality of a familys life at a very small cost. This is now our number one expenditure, and we plan to continue this on our next trip. 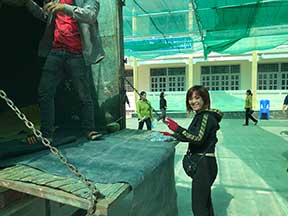 Trinh, our water tank agent. She orders them from the factory and arranges the deliveries.

A water tank recipient waiting for someone to help him pick up his tank. 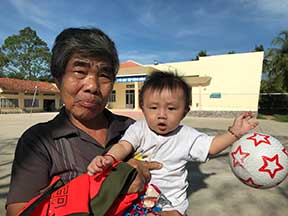 A water tank recipient and his daughter.

Our clean water project is in full swing now, and we’ve distributed 736 high quality plastic 1000 liter storage tanks over the last three years, including 355 on this trip. This year we found a new supplier who gave us a price a bit lower than last year. Our cost: $63.68 per tank. 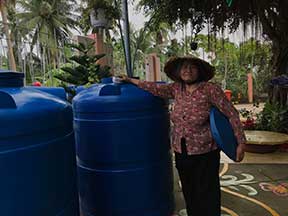 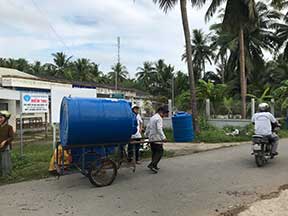 Clean rain water which can be used for both drinking and cooking is plentiful during monsoon season, but our recipients can’t afford storage containers. Their only alternatives are to buy expensive bottled water or to treat contaminated canal water with chemicals, and then to boil it for drinking and cooking. These tanks give them a safe water supply for personal and household use through the rainy season, and then is saved for drinking and cooking to stretch into the beginning of the dry season as well. 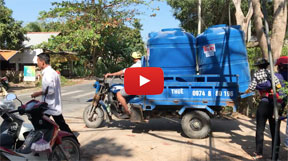 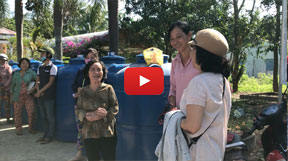 Tank recipient thanks us

Availability of clean water is an ongoing problem where we do most of our work. Although Ben Tre province is laced with canals that fill and empty twice a day with the tides, the water is contaminated, and in the dry season becomes brackish as there is no rain and not enough river flow to keep the salt water out. The only source of drinkable water, other than buying it, is rain water and the people that we want to help, the very poor, cant afford containers to collect it and to store it for the dry season. Many people use a couple of inexpensive chemicals in the canal water, one to precipitate out the solid matter and one to disinfect it. It can then be used for washing clothes and dishes and for bathing, but its still not drinkable and must be boiled for drinking or cooking.

About 10 years ago we tried a couple of different ways of providing storage. One was 2500 liter concrete tanks. Another was 200 liter clay jars. While they were appreciated by the recipients, neither way was cost effective. Last year we found high quality 1000 liter plastic storage tanks for about $65, and we bought and distributed 105 of them. This year weve made this one of the cornerstones of our work and bought and distributed 276 tanks. One hundred of them were distributed in Tan Phu district, which is on the South China Sea. A couple of years ago the water there was so bad during the dry season that water had to be trucked in to keep the hospital open. The tanks are manufactured in Saigon and delivery to us by truck is included in the price. The manufacturer offered us last years price because we are a charity.

We’ve fired up our clean water program again, and plan to continue it each year in future.

Availability of clean water is a serious problem in the area where we do most of our work.  The only source of water ready to drink is rain, and that only comes in monsoon season – May through November.  The other source of water is the canals and rivers, but they are not clean.  Chemicals are available to treat the water, but it still must be boiled for drinking.  Most of our recipients get their water this way.  Bottled water can be bought, but our recipients can’t afford it.

Storage of rainwater for the dry season is the best solution.  The problem is that poor people cannot afford storage containers.  Recently, high quality plastic storage containers have become available in large sizes and at reasonable prices.

Phuong negotiated a good price for 1000 liter tanks , about $65 each including delivery to town centers, and we bought and distributed 105 in four towns.  We checked out about half of the recipients one at a time, accompanied by town officials so they would know exactly what we were looking for, and relied on them for referrals for the rest. 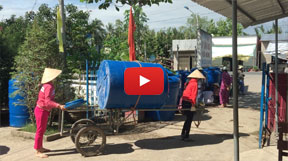 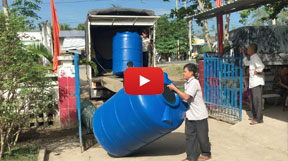 Water tanks are delivered by truck from Saigon 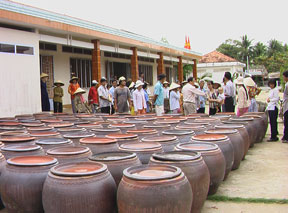 The 200 liter clay water storage jars that we purchase and distribute are very much appreciated as access to clean water is a problem in the dry season.  We gave two jars to each of 50 families in the town of Nhuan Phu Tan.  As usual, we ordered them from a factory in Saigon and had them delivered by boat.  The Peoples Committee in Nhuan Phu Tan paid for delivery from the dock to the recipients homes.  Our cost: $14.35 per family.

The price of the 200 liter clay water jars that we buy to store rain water has gone up about 50% since January. We had planned to give three jars to 120 families, but cut this back to two jars per family. The jars were ordered from the factory in Saigon, delivered by boat, and distributed by us to the families in Phuoc My Trung. 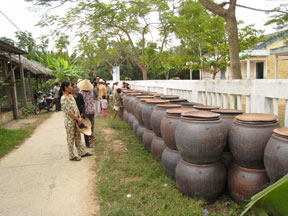 We are continuing to use the 200 liter clay jars for clean (rain) water storage for the dry season.  They are readily available or can be ordered on fairly short notice, people are accustomed to using them and like them, and they are cheap ($5.00 apiece).

We bought 150 jars and distributed three each to 50 families, 20 in Hoa Loc and 30 in Phuoc My Trung.  All families were referred to us by the Peoples Committees in the two towns.

The clean water project has been a work in progress.  When we started it early last year we built 2500 liter concrete tanks for $53 each.  We are no longer able to do so as the price of cement and labor have increased.  Also, it is very difficult to arrange labor as they must move heave metal forms from site to site and will only agree to work if we can provide several sites close together.

We have decided to continue the project as there is a clear need for safe water in the dry season and have gone to the traditional storage method – earthenware jars.  Each jar holds about 200 liters and costs $75,000 Viet Nam Dong each - $4.69 at the current exchange rate.  The cost per liter is about the same as for the concrete tanks. 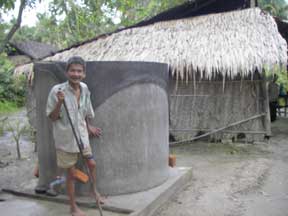 This is our newest project, and addresses the serious need of having clean and safe drinking water available in the dry season.  We built 2500 liter concrete tanks to collect rain water during the monsoon for eight families, four in Thanh An and four in Tan Phu Tay.  Our cost per tank was about $53.00.

For more information about this project, go to the dispatch section and read the February 22, 2006 letter.