Our infrastructure program is in full swing now, and we were able to find two road projects that we liked - we buy the materials and local people along the road supply the labor.

For the first one, the local town government joined in as well. There was a 614 meter section of road that hundreds of people use each day - to go to work, to school, to market, to deliver their produce to buyers, and to deliver building supplies.

We found the road in very poor condition. It was concrete, two meters wide, and broken in many places. We agreed to do about 300 meters, from an intersection to a small bridge, and the town government agreed to do the other half.

The new road is three meters wide, 15 centimeters thick, and on a base of silt and crushed rock. Heres the process:

The roadbed is widened, trees are removed, utility poles are moved. Banks are built on both sides by dredging mud from roadside canals. Silt is pumped in to make a flat, compact surface. Crushed rock, one cubic meter per three square meters of roadbed, is spread on top of the silt and compacted by vibration. We ordered 300 cubic meters of rock which was delivered one cubic meter at a time. The road is then ready for concrete.

About twenty people show up for work - all volunteers. Forms are set for the concrete. Cement, sand and rock are delivered and a cement mixer is fired up. The mixed concrete is poured into wheelbarrows and is put down and smoothed one section at a time.

Our second project was improving a trail that connects two small roads and has about 30 families along it. We did a small improvement on this trail two years ago, but it still goes underwater twice a month when the roadside canals flood at the new and full moons. The process is the same as for the larger road except no crushed rock. This is a very narrow trail - only 70cm wide (about 28) to about 100cm at its widest. This road barely seems like a sidewalk to us, but it was a big improvement for the safety and convenience of the local residents, and its completion was celebrated with ribbon cutting, speeches, and a party.

Our infrastructure improvement project is now in full swing. After focusing on individual recipients from the beginning of Vietnam Project, weve found that we can make very good use of some of our money with community based projects. Our ideal project is to identify a village road, trail or small bridge that needs improvement or repair, and to engage the community in sharing the work with us.

This year our project was improving a 600m dirt trail that serves about 30 families, most of them on side trails. We replaced it with a concrete road 2m wide and 10cm thick. It was raised above the level of the trail to prevent flooding during the twice a month high tides, and can now accommodate small trucks which can be used to deliver building supplies and to transport produce to market or other buyers.

Its exactly the type of infrastructure projects were looking for, truly a collaborative, community effort. Some of the 30 or so families on the road are poor, some better off. Some gave money, some contributed labor, some made food for the workers. Everyone did something.

On the morning construction began, a small altar was set up and the local god was offered incense, wine, tea, rice, fruit, a chicken and a duck along with wishes for a successful project and the safety of the workers. After that there was a small civil ceremony with town officials, and then they fired up the mixer and got to work.

When the road was finished it was dedicated in a community ceremony that started with another altar, this time to thank the local god for a safe and successful project. Then a ribbon cutting, speeches by town and district officials, and the unveiling of the street sign  Bo Cam Lai Road, built with the assistance of The Vietnam Project. And following that, as with every opportunity in Vietnamese culture, a party.

Last year we took an initial foray into rural infrastructure development – improving village roads, trails and small bridges. After focusing on the individual and family since our inception, we thought we could make very efficient use of some of our money doing some community based work.  Our idea was to identify projects, offer to buy the materials, and get volunteer labor from those directly benefiting from the project.  Our first two small test projects were successful, and this year we’ve decided to make this a regular part of our work. 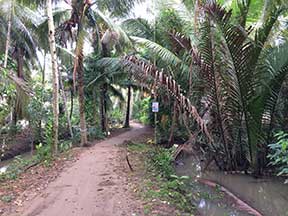 On the current trip we built one concrete road and improved two village trails. The biggest of the three projects was replacing 200 meters of dirt trail with a concrete road 2.5m wide and 10cm thick. Because this project came in well under budget we were able to do an additional 84m of connecting trail and resurface a small connecting bridge. 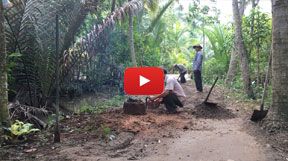 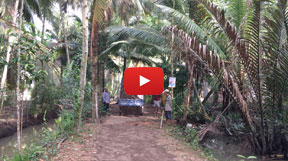 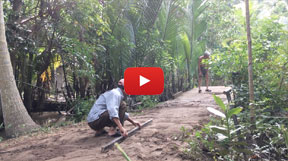 Putting down a base 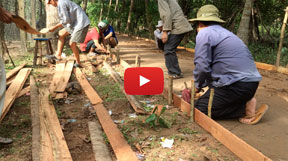 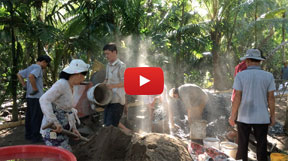 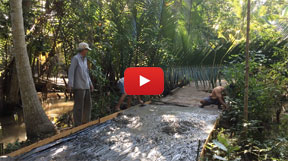 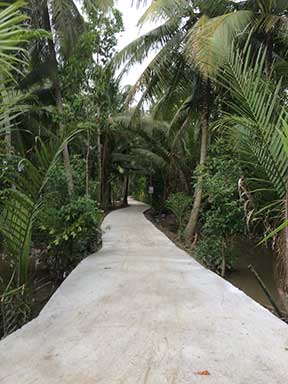 Waiting for concrete to dry 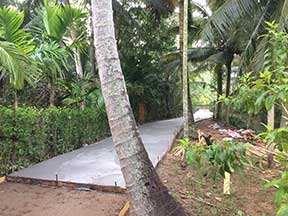 The first section is finished

These road and trail projects are especially appreciated by the communities. At the dedication ceremony for the road the leadership of the town and district showed up, as well as two representatives from the province. There was a short spot on the provincial TV news as well. Our cost for this project was $2,915. 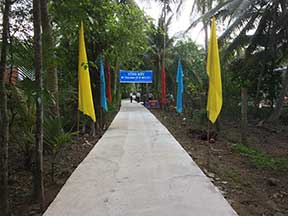 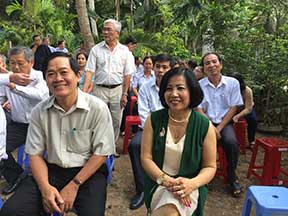 Officials and guests assemble for dedication of road

A problem with some existing trails is water. Ben Tre is an island province at the mouth of the Mekong with an average elevation of 5 feet. It is mostly rural and laced with canals, which fill and empty twice a day with the tides. On the new and full moons when the tides are high many trails flood, making them difficult and sometimes dangerous, especially for kids who use them to get to school. Improvement consists of building up banks on the sides of the trails with mud from adjacent canals, and then filling them and raising the height by pumping in silt which is dredged from the annual flooding of the Mekong. This silt self levels and forms a hard durable surface. In one case we spent $530 to bring in enough silt to improve about 300 meters of trail which directly benefited about 30 families, and in another case a town had almost enough to do a trail improvement benefiting about 20 families, and we shared the project with them, adding $132 for silt.