Assistance to the blind

We had planned to give them $3,000 to help start building a center in A Loui district. However, although they have land there, they are not yet ready to build. They asked if they could use the money to improve their center in Phu Vang district. We took a drive out there with them, took a look, and agreed.

Plans are still in place to build a center for the blind in A Loui district, but a more urgent need presented itself. One of the buildings in the main center in Hue, the one that houses the machines for making toothpicks and chopsticks, was damaged in a storm. We gave them $2,685 to repair the roof and interior of the building. 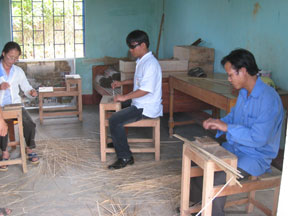 We visited the new facility in Nam Dong district, which was built entirely with money from The Vietnam Project.  There are 349 people in Nam Dong district that are blind or severely visually impaired, and this is the first time that there has been a facility to help them.  The three rooms are used as office, meeting room and workroom.  The workroom is now used for making bamboo toothpicks, and several blind adults have been trained and are working and making a living there.  Future plans include classrooms, a dormitory, more work space and a kitchen and dining room.

We gave them $2,000 which they will hold until they have enough money to start construction of a facility in A Loui district.

We gave them $3000 to continue construction of centers for blind people in outlying districts.

They have finally been given land by the A Loui district peoples committee and we plan to help them build a center for the blind in A Loui in the future.

Water and electricity have been connected in Nam Dong and we gave them $2,841 for additional construction. 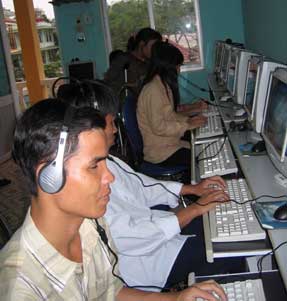 We gave them $2500 for additional construction at Nam Dong to include getting water and electricity to the buildings.

While visiting the Hue center we saw something very interesting.  They have computers with a program, JAWS for Windows, which reads information from the computer display and speaks it through a speech synthesizer.  When typing, the students hear each letter as it is entered.  Pressing the appropriate key also allows them to hear words, sentences and paragraphs they have typed.  Some of them were typing notes, letters and even poetry.  JAWS also speaks other software programs as they appear on the screen, allowing blind people to become computer literate and enhancing their chances of entering mainstream society.

They have been using version 5.0 for two years.  They would like three copies of the new version 7, each licensed for six computers and priced at $1,300 per copy. 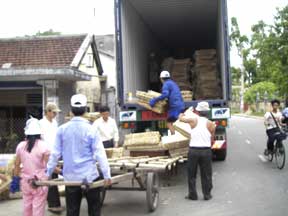 Construction of the first phase of the center in Nam Dong has been completed, but occupancy has not yet been granted because payment has not been completed.  We gave them $1000 to help complete payment so they can start using this facility to help blind children and adults in Nam Dong District.


One of the products made at the Center for the Blind in Hue is bamboo sapling protectors. This photo shows a load of them being shipped to a vendor in France. 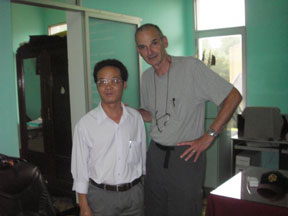 Board Member Raphiel Benjamin meets with Mr. Loc, Director of TT-H Association for the Blind
Last year we introduced Mr. Loc, director of the Thua Thien-Hue Association for the Blind to East Meets West Foundation, an Oakland, California based charity doing large projects in Vietnam.  Mr. Loc has made a proposal to EMW to fund the entire Nam Dong project.  In our opinion, it is unlikely that EMW will do this project, but Mr. Loc does not want to begin construction until he hears from them.  We gave them an additional $1000 and asked them to hold it until they have a decision from EMW.  If EMW does not agree to the project, Mr. Loc can use the $1000 along with the $4000 we have previously given them to begin construction of the Nam Dong project.  If EMW does agree to the Nam Dong project, Mr. Loc will use the money for a center in another district, possibly A Loui.

The main center in Hue now has over 60 kids in residence and is bursting at the seams.  Thanks to a grant from a French charity, they have been able to build an additional building at their main center in Hue.  Some of the blind kids who have graduated high school have taken a two year training course in massage at the Tue Ha Noi School for Traditional Medicine, and the first floor of the building has nine massage rooms which are open to the public and provide massage at a reasonable price – about $1.60 per hour.  Their idea is that the low price will encourage people of modest means to come in for therapeutic massage, work will be provided for blind young adults, and there will be some income for the center as well.

The massage is now open, and in September they will move their administrative office from the old building to the second floor of the new building and convert the present office space to classrooms. 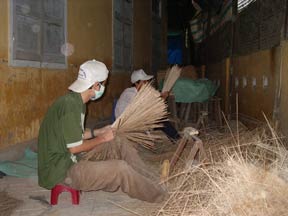 Blind young adults preparing bamboo to make toothpicks
Construction of the center for the blind has finally started in Nam Dong.  Land clearing and grading was under way when we met with Mr. Loc, the director, in February.  We gave them $1000.  This, along with the $3000 we gave them in May, 2003, will allow them to build the first three or four rooms.  Ultimately, they hope to have a two story building which will include training rooms, work areas for the manufacture of toothpicks, chopsticks and other bamboo products, a material and product storeroom, a kitchen and dining room, bedrooms, a meeting room and offices.  Activities will include training in the manufacture of bamboo products, manufacturing the products for sale, and instruction in Braille for both children and adults.  Nam Dong is in a mountainous area southwest of Hue, and many of the blind there are ethnic minority people, often still living in small villages in the mountains outside of town.

On May 14th, 2003 Phuong and I again metwith Mr. Loc, the Director to discuss current and future projects.

Loc, Phuong and I and a couple of staff went to Quang Dien to check progress on the facility we funded in December, 2002. As promised, the facility was open and operating. However, l found that I had not completely understood their intentions. I was under the impression that they were going to hold regular classroom instruction for children and this is not the case. They did not in any way misinform or mislead me, it was simply a matter of language, and my error. The facility is currently limited to vocational training and production of goods such as toothpicks and incense. Classroom instruction for children is now limited to their main facility in Hue (more on that later). At present there are 20 teenagers and adults receiving training and producing goods in Quang Dien, none of whom had any way to make a living before. Our visit included a very nice thank you talk by the facility director, as well as Phuong getting a lesson along with a blind girl in how to make incense sticks.

Attached is a receipt from the contractor showing that the final $3000 for this facility was paid to them on March 28, 2003.

The Nam Dong district government has again given them land and they should have the red tape regarding the title wrapped up by August. On May 16th, 2003 we gave them a grant of $3000 to begin construction of a facility there.

Attached is a letter which is a receipt, a statement of their intention to build in Nam Dong, and thanks to The Vietnam Project for helping to improve the lives of blind people in their province.

This facility houses and provides regular school instruction for over 50 blind and severely visually impaired children from around the province. They also do vocational training and manufacture of bamboo products. They are bursting at the seams and would like to be able to house twice as many children. The cost for the proposed project is about $100,000. A proposal is attached. While this is well beyond our current means, perhaps we could start thinking about how to get grants for this and other projects.